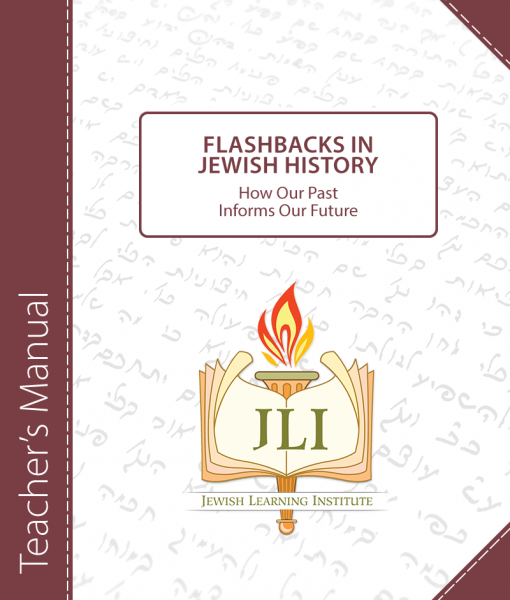 Flashbacks In Jewish History: How our past informs our future

In his parting instructions to his people, Moses stresses the importance of historical perspective, for the present is an outgrowth of our past. By studying history, we are able to relate to current issues with greater understanding.
The story of the Jewish people is a story of a nation that has contributed to world history far more than might be expected from its small numbers. Indeed, it is remarkable how often the Jews have been found at the epicenter of world events. Many surveys of Jewish history have responded to this fact by considering the impact of Jews upon other nations and their contributions to history at large.

Lesson 1
Cultures in Collision: Israel vs. Greece and Rome

In their day, both Greece and Rome were world powers determined to assimilate ancient Israel into their respective empires. The Greeks valued culture and aesthetics: they brought to the world their versions of athletics, philosophy, poetry, art, and intellectual inquiry. The Romans esteemed organizational efficiency, technology, and brute power. Yet the Jews managed to stand apart, resisting the temptation to trade their faith for the attractions of an outside culture. In this lesson, we examine the source of their inner strength.

Lesson 2
Far From the Place That We Call Home: Jewish Exile and Dispersal in the Middle East

After the destruction of the Second Temple in 70 CE, the Jews were left without a centralized government or a country of their own. Yet under the benign rule of Babylonia, the Jews made Torah study the new epicenter of Jewish life. Twice yearly, Jews gathered at the great Babylonian academies to discuss a pre-assigned tractate. The Talmud was recorded during this intellectually fruitful period of time. In this lesson, we reflect on the role of shared study in uniting a far-flung people.

Lesson 3
All That Glitters: The Golden Age in Moslem Spain

In this lesson, we note the start of the decentralization of Jewish life, with communities of Jews establishing their own traditions and religious leadership. Our class focuses on the Golden Age in Moslem Spain, a period marked by relative prosperity and religious tolerance. Many Spanish Jews became well integrated into the surrounding society, contributing as scientists, statesmen, and poets. But when the fanatical Almohads swept through Spain, waging war against all who did not share their faith, this glorious period of cultural interchange was brought to an end. As the Middle East grapples with the struggle between moderate and radical Islamic factions, this period in history resonates anew.

European antisemitism of the twentieth and twenty-first centuries has its roots in medieval Christian Europe. In this lesson, we examine the role of the Church in inciting the hatred of the populace. Whole communities were wiped out during the Crusades, and discriminatory edicts were the rule rather than the exception. Another expression of hatred was the public burnings of the Talmud. Yet Jews remained devout and found comfort and solace in their faith. Among the Torah giants inspiring the Jews through these dark times were Rashi and the Tosafists.

Lesson 5
In the Shadow of the Inquisition: The Downfall of Spanish Jewry

In response to Christian oppression and antisemitism, many Spanish Jews chose conversion as a means to protect their standing in society. The consequences of this widespread choice were devastating, leading to the horrors of the Inquisition, and ultimately, the end of Jewish settlement in Spain. Yet even those who succumbed to the temptation to assimilate into Spanish society exhibited remarkable tenacity at their core.

Lesson 6
Rising from the Ashes: The Renewal of European Jewry

The expulsion of Spain dealt a devastating blow to Sephardic Jewry, comparable to what the Holocaust would later mean for Ashkenazic Jewry. Eventually, the exiles found new homes in Turkey, Holland, Greece, and the Holy Land. During the aftermath of the expulsion, Jews found new strength within their tradition for making sense of the suffering and loss they had endured. The mystics in Safed taught Kabbalah, and introduced many spiritual practices emphasizing hope for redemption that endure to this day. The forerunner of the modern yeshivah, or house of study, was born. In spite of the irreplaceable losses they had sustained, the Jewish people emerged from the medieval era to experience a renaissance of Jewish life.