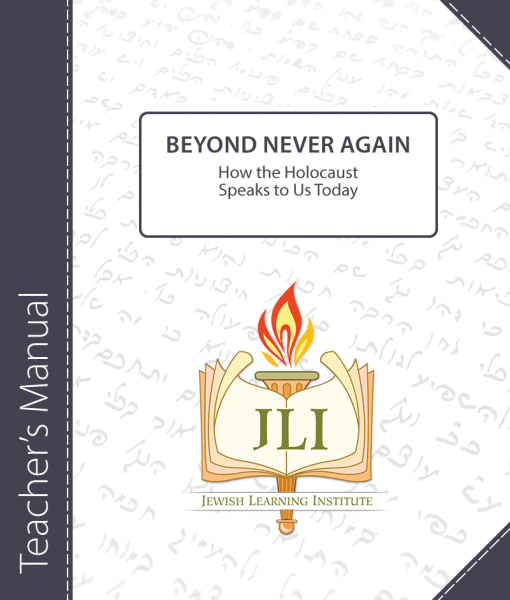 Beyond Never Again: How the Holocaust Speaks to Us Today

Explore the ways in which the Holocaust continues to affect our generation and colors what it means to live as a Jew today.

The Holocaust forces us to grapple with the existence of evil and suffering. It challenges us to find faith and optimism in the face of devastation and despair. And it humbles us as we encounter heroes of the spirit who fought for truth and decency in the darkest of times.

Lesson 1
Wrestling With G‑d
Why do evil people prosper? Why does G‑d permit the suffering of the innocent? Moses, Jeremiah, and Job asked these questions, and we still grapple with them today. A non-believer may consider world events as random, requiring no explanation, but the believer is forced to struggle with these questions. Judaism believes in a benevolent, omnipotent, and omniscient G‑d, and that ultimately, there will be a time when all suffering ceases. Thus, there is no easy answer to explain the Holocaust, nor do we seek one. For if we were to explain suffering, we might accept it. Our response to global suffering must be to decry its existence and fight for its eradication.

Lesson 2
The Voice of Your Brother’s Blood Cries Out
We cannot hear the universal message of the Holocaust unless we appreciate the particulars of its evils. While people of many nationalities suffered during the war, we must recognize that the Holocaust was disproportionately a war against the Jews. Each of the six million Jews who perished has a story that deserves to be told. Their stories remind us that every lost life represents the loss of an entire world.

Lesson 3
In Their Death’s They Were Not Parted
Judaism affirms the value of life and forbids suicide. And yet the mitzvah of Kiddush Hashem (Sanctification of G‑d’s Name) involves the willingness to face death under certain circumstances. How are these two values reconciled? In this class, we take a historical view of both individual and collective martyrdom, considering examples like King Saul. Rabbi Akiva, the martyrs of the Crusades, and those who perished in the Holocaust. We will explore the religious context within which martyrdom takes place and consider how these ideals impact our modern world.

Lesson 4
Out of the Depths I Call To You
While we must never be complacent with regard to the suffering of others, we can learn to find meaning in the face of our personal challenges. Life’s purpose unfolds on many levels, and it is impossible to know the true impact of a given event. While we cannot always know why something happens, by fostering our appreciation that G‑d is intimately involved with the universe, we can learn to use every experience as a catalyst for positive transformation. Faith is not a crutch for the weak, but a scaffold for life constructed with inner strength. Trust in G‑d is not born of simplistic denial of harsh reality, but of profound humility in the presence of the divine plan.

Lesson 5
A Tree of Life to Those Who Cling To It
Halachah (Jewish Torah law) serves as a guide for life, even in the most trying of times. In this class, we will examine actual halachic advice sought during the Holocaust. The responses have much to teach us about Jewish values, but the more astonishing fact is that these questions were asked at all. Some of these questions reveal the sacrifice Jews were willing to undergo in order to observe mitzvoth. Some reveal the moral courage of Jews who debated whether they were permitted to save their own lives at the expense of others. All are testament to an inner integrity and strength that transcended the horrors of that time.

Lesson 6
When Night Will Shine Like Day
When examining human behavior in light of the Holocaust, we are presented with a number of paradoxes. The most culturally and scientifically advanced society on earth used its sophistication to create the most efficient genocidal machine the world has ever known. And many of the righteous gentiles who sacrificed their own safety and well-being were poor, uneducated, and provincial in their worldview. What can we expect of humanity after the Holocaust? Can we prevent human progress from falling prey to moral bankruptcy? How can we retain faith in the future of the universe—and what we can we do to ensure a brighter tomorrow?