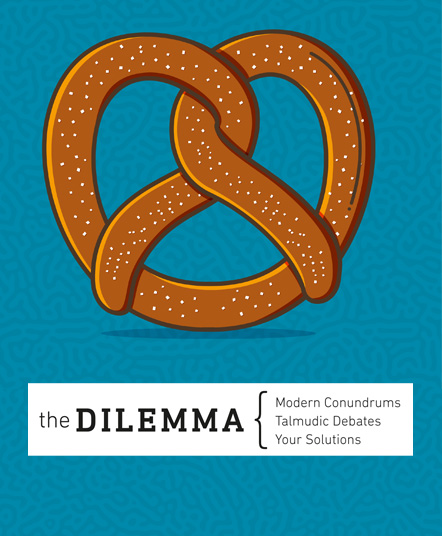 Apply mind-bending, brain-twisting, hair-splitting Talmudic reasoning to solve real-life modern dilemmas—situations that actually happened yet seem impossible to solve. What do you do when your gut tells you one thing, and your brain tells you another? Prepare for a mental expedition to mind-wrestle with situations that force us to choose between two reasonable truths.

On a hot day in July 2016, a group of young men on Chicago’s West Side broke into a pickup truck and stole a laptop. Unbeknownst to the thieves, there was a dog in the car that might have died in the heat had they not broken the window. The car was parked for about an hour before the owner’s return, long enough to cause heatstroke in pets according to the American Veterinary Medical Association.
All would agree that the laptop must be returned, but should the thieves be prosecuted for breaking the window? Should they compensate the owner for the broken window? Should they be rewarded for saving the dog? Should criminals be rewarded or at least not punished for malicious actions that produce unintended positive results for the victim?

LESSON 2
Taking the Law into Your Own Hands

A shopkeeper in Rechovot, Israel, noticed a burglar breaking into his shop. He recognized the burglar as the man who had burglarized his shop twice in the recent past. An altercation ensued in which the owner struck the burglar with a plank of wood, and stabbed him five times in the legs with a sharp object.
Should we be permitted to take the law into our own hands? Is the use of force ever justified if law enforcement is not on the scene? If you find a thief with your stolen bicycle, should you be allowed to seize the object by force, or must you turn to the courts despite the delays and expenses it will entail?

A woman from Issaquah, Washington, was dining at an Italian restaurant, when she bit down on a pearl. Although most claims of finding valuable pearls turn out to be false, gemologist Ted Irwin determined that this was a beautiful Quahog pearl, valued at $600. He added that the chances of finding a natural, gem- quality pearl like this one was probably “one in a couple million.”
Suppose this occurred to a guest in your home. The pearl was found in your fish, in your home, but on your guest’s plate. Can you make a claim to the pearl or would you agree that it belongs to your guest? Did you give away the pearl with the fish? Can you give away what you don’t even know exists? Was the pearl ever yours in the first place?

LESSON 4
Liability for Proximate Cause

Pokémon Go is an app that allows users to interact with virtual Pokémon characters positioned all over the world. It is a global phenomenon with more than five hundred million downloads, but it is not without some ethical problems. The app has a “Lure Module” that players can use to attract Pokémon users to their location. Four teenage suspects were arrested in O’Fallon, Montana for armed robbery against Pokémon Go players that they lured to their location with this app. And Pokémon Go users have on occasion caused damage in neighborhoods rich with Pokémon characters that had been placed on private properties by the game’s owners.
Should Pokémon Go be required to remove their virtual figures from private property? Does responsibility lie with the users who play the game or should the owners of Pokémon Go be held responsible for the crimes and damages caused by their platform? Is there a difference in legal responsibility between crimes enabled by this platform, and injury or property damage similarly facilitated?

LESSON 5
More Equal than Others

Tesla Motors, a US-based electric car company, introduced autopilot driving to its electric cars. These cars are driving millions of miles every day on highways across the world, collecting information, and sending it back to a huge central database. This, in turn, will make autonomous driving for all a thing of the not-too-distant future.
When designing such technology, engineers face moral questions that rarely arise in real life. Suppose the car is fast approaching a tunnel entrance when its braking mechanism fails. Suppose a child has tripped and is lying across the entrance, blocking the tunnel. Should the car be designed to move forward and kill the innocent child or swerve into the tunnel wall and kill the innocent driver? Should the engineers program the car to choose based on age or number of victims? Suppose the car could plow forward into multiple victims or swerve to the side to kill one previously unendangered victim: Should one person die to save many?

LESSON 6
Accomplice to the Inevitable

A 14-year-old boy and his friends often played on a public bridge in Berlin, New Hampshire, where nearby, there were electrical wires that were owned and maintained by Twin State Gas & Electric Co. One afternoon, while sitting on a horizontal girder, the boy lost his balance and took hold of one of the wires to save himself from falling. He was electrocuted and died instantly. Henry Dillon, the boy’s father, brought suit against Twin State for wrongful death on the boy’s behalf. Had the wires been insulated properly, his son’s life would have been spared. Twin State argued that without the wire present the boy would have fallen into the river, and he would have without doubt been killed.
What should the law be in cases where there are two sufficient causes of harm with one preceding the other (“preemptive causes”)? And what if both causes arrive simultaneously (“merged causes”)? Should there be differences in this regard between monetary cases and cases of life-and-death?