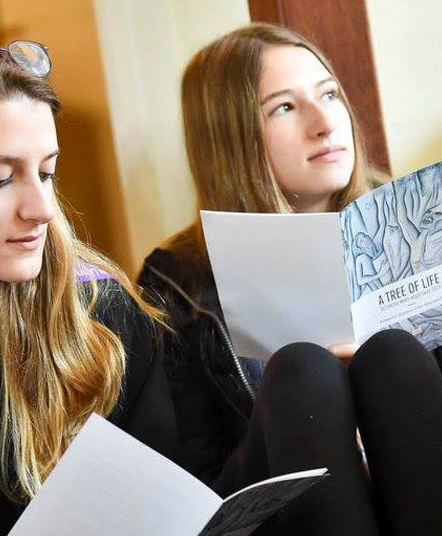 A Tree of Life

Explore the ways in which the Holocaust continues to affect our generation and colors what it means to live as a Jew today. The Holocaust forces us to grapple with the existence of evil and suffering. It challenges us to find faith and optimism in the face of devastation and despair. And it humbles us as we encounter heroes of the spirit who fought for truth and decency in the darkest of times.

For participants in March of the Living

Thousands of North American young adults participate in the annual March of the Living from Auschwitz to Birkenau on Holocaust Remembrance Day—one of today’s most significant platforms for Holocaust education. Participants gain a powerful sense of human solidarity and Jewish survival, and a commitment to prevent the repetition of such monstrosities.
While Holocaust educational offerings generally focus on malice, death, and destruction—the most obvious experiences of that era—there are equally critical scenes begging to be explored, such as valiant quests to remain free, to preserve spiritual connections, and to make ethical decisions despite overwhelming horror.
This highly poignant curriculum features real-life cases from the Holocaust era that highlight the victims’ spiritual lives and ethical commitment. Students who have taken this in the past were fascinated and profoundly moved to read first-hand accounts of this nature presented as thought-provoking material.